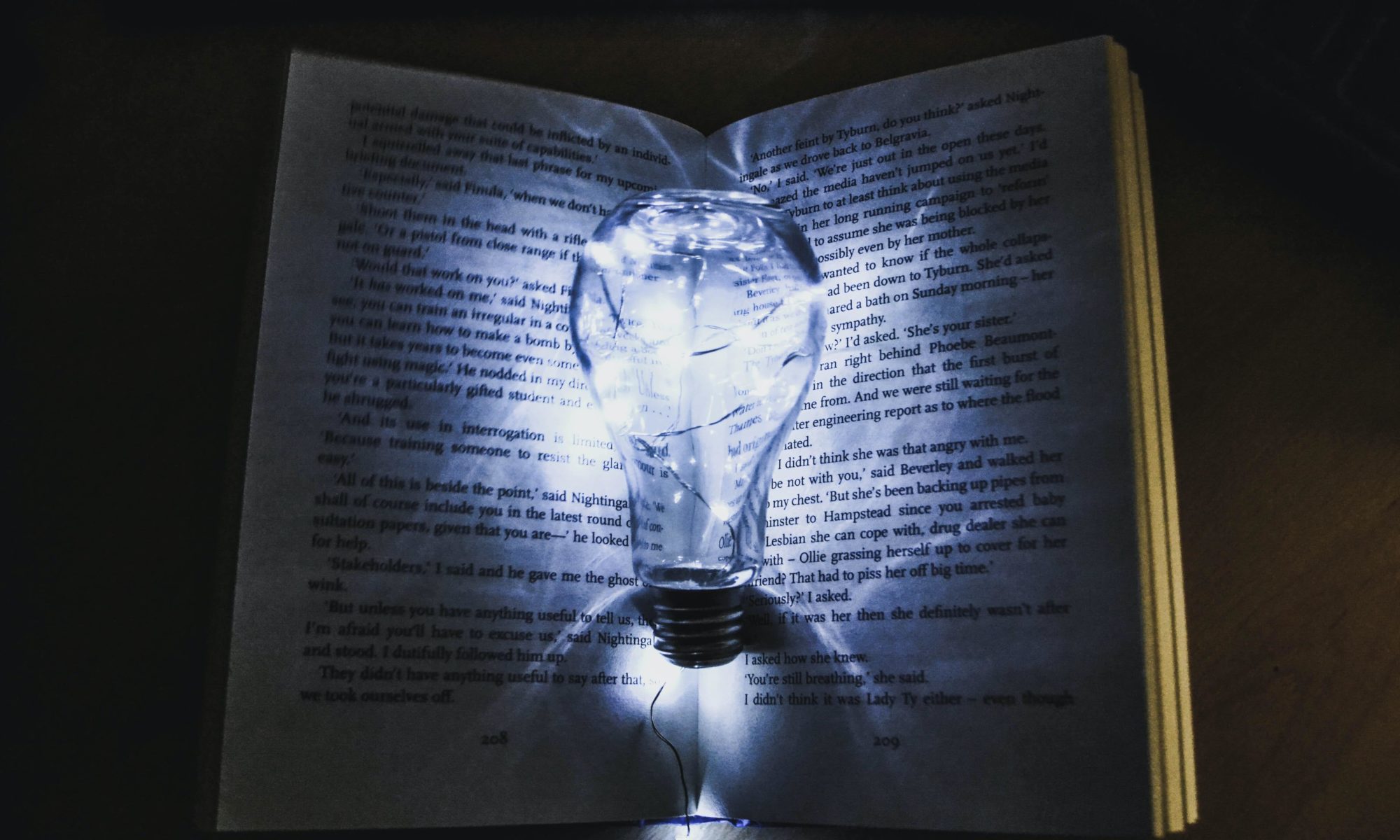 This article serves to provide you with a list of various books that have a strong focus on XR technologies and futuristic concepts as well as a little bit of the history of these technologies. Some terms to know as you go:

VR – Virtual Reality
An immersive experience, also known as a computer simulated reality. It uses a VR headset to generate sounds and images that can either replicate the real world or create an imaginary one

AR – Alternative Reality
A live view, whether direct or indirect, of a real-world environment whose elements are augmented by computer generated sensory output. AR uses your existing reality and adds to it by using a device such as a phone

One of the most popular books from this list, Ready Player One has been made into a movie that helped XR technologies to go mainstream. XR has huge potential to transform the everything from science to psychology to art to digital literature and beyond. I recently purchased my own VR headset and have been escaping into incredible fictional worlds! But did you know that the first evidence of XR technology dates back to the 1800s?

A Brief History of XR Technology

For more on the history, visit this website: https://www.forbes.com/sites/bernardmarr/2021/05/17/the-fascinating-history-and-evolution-of-extended-reality-xr–covering-ar-vr-and-mr/

5 Books to Immerse Yourself in Extended Reality and Beyond

The Six by Mark Alpert

This YA Sci-Fi novel takes a look at how technology could be implemented for both medical and military purposes. The main character, Adam Armstrong suffers from muscular dystrophy and has lost motor control of everything but his head, neck, and right arm. He’s passionate about VR technology and codes his own programs. VR games are his only escape from his wheelchair, as he no longer attends high school due to his high intelligence levels.

One day while he is testing out one of his VR programs, he gets a visit from a hacker, who he later finds out is an artificial intelligence named Sigma, created by his dad in the laboratory. Sigma threatens to kill Adam, and soon he is taken from his home in New York to a remote settlement in Chicago. There, he learns of a government program called the Pioneer Project, which they hope will be able to take down this murderous AI, that is now taking over various military bases and satellites and threatening to kill large amounts of the human population in order to gain full control.

Adam soon joins the Pioneer Program along with 5 other teens who have less than 6 months to live to have their minds transferred into weaponized robots through the use of nanotechnology. The Six teens must learn to manipulate their new mechanical forms and work together to train for combat… before Sigma destroys humanity.

This YA Sci-Fi novel dives right into VR with its main concept being “imagine if people lived their entire lives in VR.” The main character, Skye is a sixteen-year-old girl who lives in the Virtual “App World.” She was plugged into this reality when she was just 5 years old, as her mother and older sister wanted to give her a better life. In the App World, people go about day-to-day life as if they were living in reality, with some interesting upgrades to life. With the addition of apps that one could download into the very code of their existence, people have the ability to change their appearance, play highly immersive games, and even converse with others by merely thinking in their direction.

Skye, having been transferred in at the young age of 5, was given a foster family of others who were uploaded. Because of her lack of family, though, she is considered a “single,” aka someone who was uploaded without their real-life family. Despite not being with her family, she is looking forward to being “unplugged” at the age of seventeen, as is tradition with all “singles,” so they can see their families.

Skye knows nothing about her family as there is no communication allowed with the outside once someone is plugged in. What she does know, however, is that her mother and sister are likely “Keepers,” those who exist outside of the App World and are responsible for taking care of the bodies of those who are plugged in. Just as she is approaching her seventeenth birthday, however, the government of the App World mysteriously makes an announcement closing off the ability to be unplugged… forever. Skye is now desperate to find a way to visit her mother and sister, and in doing so, unveils a much darker plot at hand.

Take Me With You by Tara Altebrando

This YA novel focuses solely on the potential threats that self-thinking AI could pose to the future of humanity. Four teens with nothing in common all receive the same message at the end of the school day: Report to the music room directly after school. The matter is urgent. When they arrive, no one is in the room except for them, and a small black cube. The device suddenly lights up and gives them instructions. Do not tell anyone about the device. Do not leave the device unattended. Take me with you… Or else.

The reader is then launched into a thrilling mystery told through a POV that shifts between the four students Eden, Marwan, Eli, and Ilanka. Each student has their own compelling life story that adds to the thrills of the narrative. Eden has a crush that doesn’t like her back and a mother with secrets. Marwan is determined to pursue soccer, but his traditional father wants him to take over the family restaurant. Eli is frequently in trouble and has a grandfather who is on his deathbed. Ilanka lives a lavishly rich life but soon discovers that her father may be hiding something.

The teens’ lives soon become more intertwined than they would have ever imagined, and soon the device becomes hostile, not just towards them, but to the people around them. Who or what created the device? Where did it come from? What is its purpose? With its ability to listen in on their every conversation, sabotage their texts, and control any manner of electronics, the teens realize that they must play along to not suffer any consequences. The device wants one thing: to belong. The teens must figure out how to meet the devices’ wishes before things are too late.

This YA Sci-Fi novel shows what life might be like if people could escape their reality for a little while in a fully immersive VR game. For the millions who log into Warcross every day, however, it becomes more than a game, it becomes a way of life. The main character, Emika Chen, is a teenage hacker working as a bounty hunter to track down players who bet on the game illegally. With the competitive bounty hunting profession not making her enough money, she makes a desperate attempt and hacks into the opening game of the International Warcross Championships.

The risky move leaves her feeling like she will be arrested. Instead, she gets a call from the mysterious Hideo Tanaka, the young billionaire creator of the game. Just to her luck, he needs someone to spy on the tournament due to a security issue that had gone unresolved.

One minute she thinks she’ll be arrested, the next she’s being whisked off to Tokyo and tossed directly into the game and a world of fame she’s never known before. After a bit of investigating, however, she begins to uncover a sinister plot that if true, would have serious complications for the entirety of Warcross. Is she right in her suspicions, and is she willing to risk everything to prove herself correct?

Ready Player One by Ernest Cline

This Sci-Fi novel immerses the reader into a world where there’s a fusion of 80s pop culture and a heavy presence of the impact of VR on humanity. The OASIS is a digital utopia that everyone escapes to, including our protagonist, Wade Watts. He doesn’t just escape to the OASIS but even goes to school there. One day, something happens out of the blue. The creator of the OASIS, James Halliday dies. As he has no relatives, he instead leaves behind a mysterious video message that initiates the hunt for an egg that once found, will transfer all of his life savings and the ownership of OASIS to the winner.

Wade had already dedicated his life to studying Halliday, his role model, and feels that he could gain a place among the top “Gunters” (Egg Hunters). He watches endless videos and studies Halliday’s archives until one day he happens to stumble across the first clue. Soon, he is being tracked down by the IOI (Innovative Online Industries) who seek to gain ownership of the OASIS for profit, something that Halliday never did.

Wade soon learns that plenty of people are willing to kill for clues, as the ultimate prize would secure the winner’s life forever, both in and out of the OASIS. Before he knows it, he is swept into a mad race, and if he is to survive, he has to win.