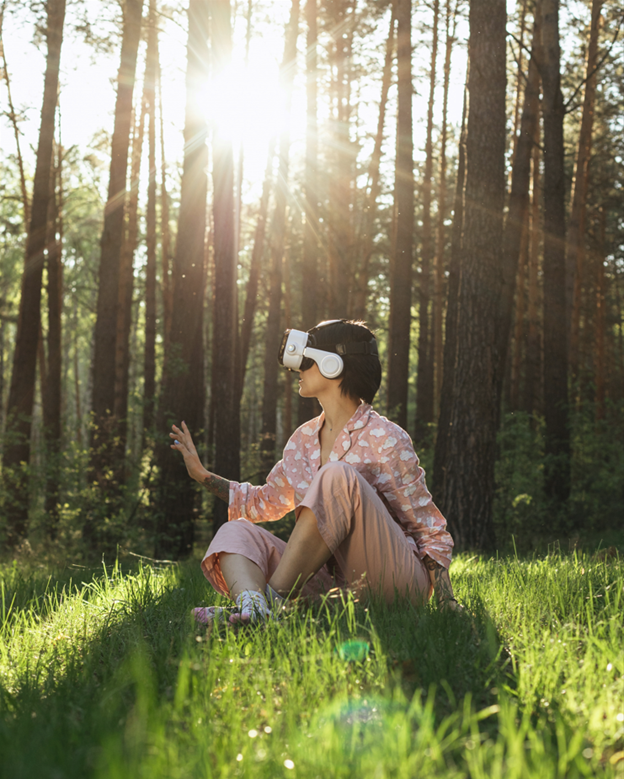 I first encountered the idea of virtual reality (VR) when I read the book Ready Player One by Ernest Cline. As an avid reader of science fiction books, I loved the idea of being able to escape to some virtual world through a VR headset. Soon after I read the book, the movie was released and seeing the concept executed in a visual form only increased my interest in the subject. Despite my fascination, I took it as the book genre labeled it. Fiction. I believed that there were no VR headsets, as I had never seen or heard of anyone having them.

In the fall of 2020, I happened across an advertisement for the Oculus Quest 1. My interest in the novel had not wavered, but nevertheless, I was shocked. I hadn’t realized that the concept introduced to me through a science fiction novel was real in the form of a readily available, and relatively affordable technology. I had been saving money for a while and prepared to make my purchase. Luckily, a friend encouraged me to wait a few months, as in October 2020, the Oculus Quest 2 was released. I ordered the headset and eagerly awaited its arrival.

When I finally got my hands on it, I was over the moon. It may not have looked like the vision Cline painted in his novel, nor like the version in the movie, but it was virtual reality nonetheless. In the time between ordering and receiving the headset, I researched various games and experiences that I wanted to try upon its arrival. Beat Saber, a rhythm game, was top of my list and was my first purchase on the device. I’d never been one to read instructions for consoles, games, or anything at all, so I dove right in and set up my account.

As soon as I began playing, I was hooked. Whether it was the idea of actually experiencing VR or the catchy songs of Beat Saber, I absolutely fell in love with my Quest 2. I played it every moment I had time. As I danced around my living room slashing to the beat of the songs, my parents asked me what I was doing.

I excitedly explained to them what VR was, and how it worked. It was at this point I had my first experience sharing VR with someone else. After a long tutorial on how to wear the headset, how to navigate the menu, and how to play the game, my parents tried out VR for the first time.

This was all back over the winter break of 2020-2021, just before I interviewed to join the Studio X team as a Karp Library Fellow to do XR research. This was during the time that the pandemic was still pretty bad, and VR provided an escape from the harsh reality around me. It helped my anxiety and allowed me to relax, even if just a little bit while I was immersed in the world of VR.

Ever since that initial experience, I made an effort to introduce as many of my family members as I could to virtual reality.

It was the various times of having my mum try VR that really inspired me to explore the topic of user interaction with VR further. Her reactions to the various experiences I had her try really made me understand the impact that VR can have on people’s lives. Her first experience was with Beat Saber, which she thoroughly enjoyed due to its catchy songs, but it was Job Simulator that really captured her attention. “I thought it was going to be dumb,” she said. “When I saw you doing it, it looked silly, but when I tried it, it blew my mind. It was a strange experience because it really made me feel like I was in the room.” For me, it was especially funny watching her play Job Simulator. I had to make sure she wouldn’t forget about the guardian boundary, as she kept trying to walk down the virtual hallway when, in reality, she was about to crash into the coffee table. Another interesting thing was how she was worried about dropping the virtual coffee cup, because she didn’t want it to break or make a mess on the floor.

While he didn’t try Job Simulator, my dad tried Walkabout Mini Golf. He’s not much of a mini-golf fan, but he was blown away by how realistic the physics were in the game. He said he kept feeling like he was going to fall off the edge of the map and even tried walking from hole to hole (which would have required a lot more space than we have in our living room). “You really don’t know what it’s like until you try it, and when you do, you can see all kinds of applications this technology may have in the future.”

I, of course, wasn’t going to have them do Beat Saber, and I didn’t have Walkabout Mini Golf at the time, so I had them watch a few Oculus TV videos.

Having my 96-year-old Great Grandma try VR was quite an interesting experience. She was in awe at the capabilities of the technology and loved the fly-over nature documentary about the ice caps.

My Grandpa watched a few shorter space documentaries and was thrilled to be immersed in the galactic environment.

After seeing the unique reactions from all my relatives, I was curious to know how others felt about their experiences with VR. I had joined several VR-focused Facebook groups to see the kinds of conversations people were having about VR and then decided to run a survey to directly ask the community about their experiences.

With the survey titled “How do Users Experience VR,” I asked a range of questions about age, their perception of VR, what they used it for, and if they had any stories they wanted to share. After about a week and a half of running the survey, I had 282 responses to go through.

One of the things that interested me the most was the age range distribution of those who responded. I’m not sure if this is directly related to the survey being run on Facebook and the demographic of Facebook users, but it doesn’t feel like a misrepresentation as the group was specifically for Oculus Quest users, and Oculus, now the Meta Quest, is owned by the same company.

The following information is taken directly from the survey results. Some of the quotes have been reformatted a bit for coherency.

This first quote is from a friend who had some previous experience with VR. I had them try VR on my headset before asking them to fill out the survey. Their unique perspective on the potential threat VR poses to society is one that I haven’t seen discussed much elsewhere, which is why I believe it is important to include it here.

I included the next quote because it shows VR being used as a tool for long-distance interaction and also how people in your environment perceive you as you play VR.

These next two quotes are particularly interesting as they show the potential uses for the elderly and the health benefits of using VR.

The following quote shows the emotional impact VR can have on people through the experiences it allows one to have.

These next quotes show an optimistic perspective for the future of VR technology.

The next several quotes show the potential therapeutic and mental benefits of using VR.

This next shows how giving VR a second chance can completely change your perspective on the technology.

The last quote I leave you with is a pretty cool perspective on how the technology has changed over time, and how it has impacted this person’s life and social interactions.

VR is rapidly growing to be one of the most popular forms of XR. It is estimated that in 2020 nearly one in 5 people in the US, or 19% of consumers, used VR. Due to this increasing demand, it is expected that nearly 15 million AR and VR devices will be shipped to customers worldwide in 2022. Source

The quotes provided above shine a small spotlight on the many ways that people are being impacted by VR every day. From new ways of socializing to new methods of staying physically and mentally fit, VR has the ability to benefit everyone in some way shape or form due to its versatility. It is this social and emotional impact that allows VR to become so popular, as people feel directly connected to the experiences they are trying while in VR. The ever-present description of VR being the ultimate empathy machine is growing more and more accurate as the technology progresses and the range of possibilities expands.

Education from the sciences to the humanities, job training, interpersonal relationships, concerts, work meetings, all these fields can and are already benefiting from VR technologies. More and more people are being exposed to VR every day, and soon enough, it will become a household staple, much like cellphones and TVs. And why? Because of the ways we as users experience VR. It is the consumer perspective that shapes the industry, which is why it is so important to understand why people react the way they do to these technologies.

I personally believe that VR has shaped my perspectives on the world in ways I wouldn’t have been able to imagine due to some of the experiences I have tried. VR has opened my mind to new perspectives on personal space, human interaction, disabilities, and even the way I view myself as a person existing in the real world versus in the digital one.

VR has a unique ability to change perspectives and influence emotions, and it is up to the people using it to decide what path VR ultimately goes down.

2 Replies to “First and Lasting Impressions of VR”