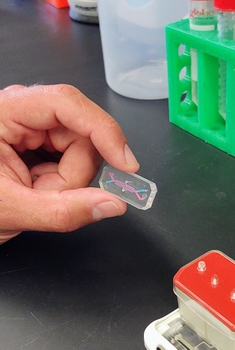 A Wilmot Cancer Institute scientist published data that show a new microchip-like device that his lab developed can reliably model changes in the bone marrow as leukemia takes root and spreads.

Ben Frisch, Ph.D., assistant professor of Pathology and Laboratory Medicine and Biomedical Engineering at the University of Rochester, and colleagues have been building what is known as a modular bone-marrow-on-chip to enhance the investigation of leukemia stem cells. The tiny device recapitulates the entire human bone marrow microenvironment and its complex network of cellular and molecular components involved in blood cancers.

Similar tissue-chip systems have been developed by others, but they lack two key features contained in Frisch’s product: osteoblast cells, which are crucial to fuel leukemia, and a readily available platform.

The fact that Frisch’s 3D model has been published in Frontiers in Bioengineering and Biotechnology and is not a one-off fabrication will allow others in the field to adopt a similar approach using the available microfluidics system, he said.